1455 in The Winchester Star 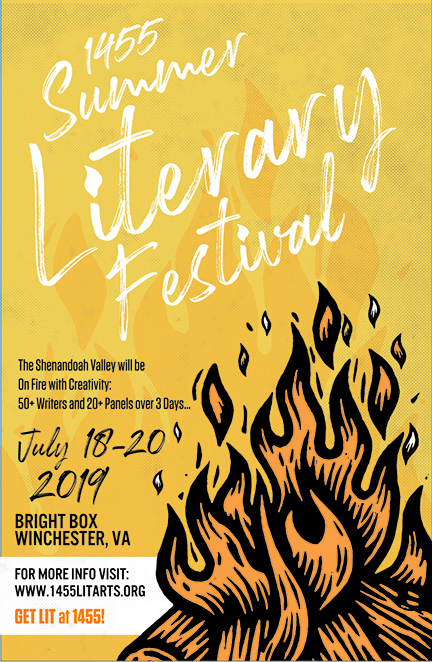 You can check out the piece online here, and it’s pasted, below.

A few things: you can find out all about the festival (including the agenda, all the speakers) and register at our official website, HERE.

This festival, set for July 18-20 with the bulk of programming at Bright Box on the downtown walking mall in Winchester, also has events at the Winchester Brew Works and the Winchester Book Gallery. All this programming is FREE to the public (and those who register in advance can also get a free lunch either or both Friday and Saturday). A special cocktail/dinner reception at Shenandoah University is a ticketed event ($50) and will take place Saturday, July 20.

Help us spread the word, and we’ll look forward to seeing you there!

WINCHESTER — You’ll need to go online to register for 1455’s Summer Literary Festival, but don’t bother looking for the link to pay the registration fee.

There is no fee.

In keeping with its mission, 1455 isn’t charging anything for the three days of panel discussions and networking opportunities. No charge for the opportunity to hear from published authors in fiction, poetry, non-fiction and children’s literature. No charge to ask question s and share information with writers — both accomplished and aspiring.

“I want to be consistent right from the get-go,” said Sean Murphy, founder and executive director of 1455, a Winchester-based nonprofit seeking to advance the literary arts. “All the public events will be free.”

The Summer Literary Festival takes place from July 18-20 with most of the events being held at the Bright Box on the Loudoun Street Mall.

Numerous panel discussions will be offered during the festival covering such varied topics as creativity, making a living in the arts and memoir writing.

A panel discussion on political books will feature Tom Kapsidelis, author of “After Virginia Tech: Guns, Safety and Healing in the Era of Mass Shootings.” A discussion about local legends Willa Cather and Patsy Cline will include John Lingan (“Homeplace”) and Melissa Homestead (“The Complete Letters of Willa Cather: A Digital Edition”) and be moderated by author Warren R. Hofstra, a history professor at Shenandoah University.

For a full agenda and to register, go to http://bit.ly/1455literaryfestival. Those who go online and register will get a free lunch. You can also show up the day of the event, but you won’t get that free lunch.

“It started with modest goals,” said Murphy. “I certainly didn’t set out to create a three day action-packed event. But soon into the planning stages we realized if we’re going to do this, let’s make a splash. The festival will be our coming-out party.”

1455 began last year under the name the Virginia Center for Literary Arts. The group had a busy year, sponsoring an author series at Handley Regional Library and a number of workshops at Long Branch and the Barns of Rose Hill. But Murphy began to fear that the name was limiting the organization’s growth.

“When we first started it, it seemed like a no-brainer,” Murphy said of the name. “But eventually we wondered if we were unintentionally putting out a message that we’re a Virginia thing.”

With the help of his board of directors, Murphy chose 1455 — the year the Gutenberg printing press began cranking out books in sufficient quantities to truly democratize reading and writing.

“I love the notion how that invention is arguably the single most important thing that helped bring literacy to the masses,” Murphy said. “It took literature out of the control of the elite.”

The eventual home of 1455 will be 125 S. Braddock St., which will serve as a writer’s residency and workshop space. The real estate is paid for and the design plans are finished. Murphy is the process of raising the money to start the renovations. Work could begin by the end of the summer if the money falls into place, he said.

“I think Winchester is the perfect backdrop for all the activity,” said Murphy, who made his living as a tech writer in Northern Virginia but also found time to write a well-received memoir and serve as a writer in residence on Martha’s Vineyard. “This will become more of an oasis with people from D.C. and all over the country. It will be good for the community. It’s a place that won’t just attract writers, but people who will spend money at restaurants and shops.”

Once it’s up and running, 1455 will charge writers modest fees to stay at the Braddock Street site for a couple weeks at a time to work on their craft.

Many writing retreats are held in New England or in the mountains out West and are limited by the seasons. They often are expensive and require an impressive resume of writing credits, he said.

The 1455 center will be able to run year around and the prices will be reasonable.

It will be a place for the inexperienced writer or the older writer who wants “to fall back in love with their passion,” he said.

With social media and self-publishing, it’s never been easier for a writer to find an audience. But Murphy isn’t afraid there will be too many voices competing for attention.

“Do we cap the number of musicians or filmmakers?” he asked. “Things that are noteworthy will rise to the top. There are a lot of writers out there, but the stories that are meaningful will be recognized.”