VCLA at Virginia Festival of the Book 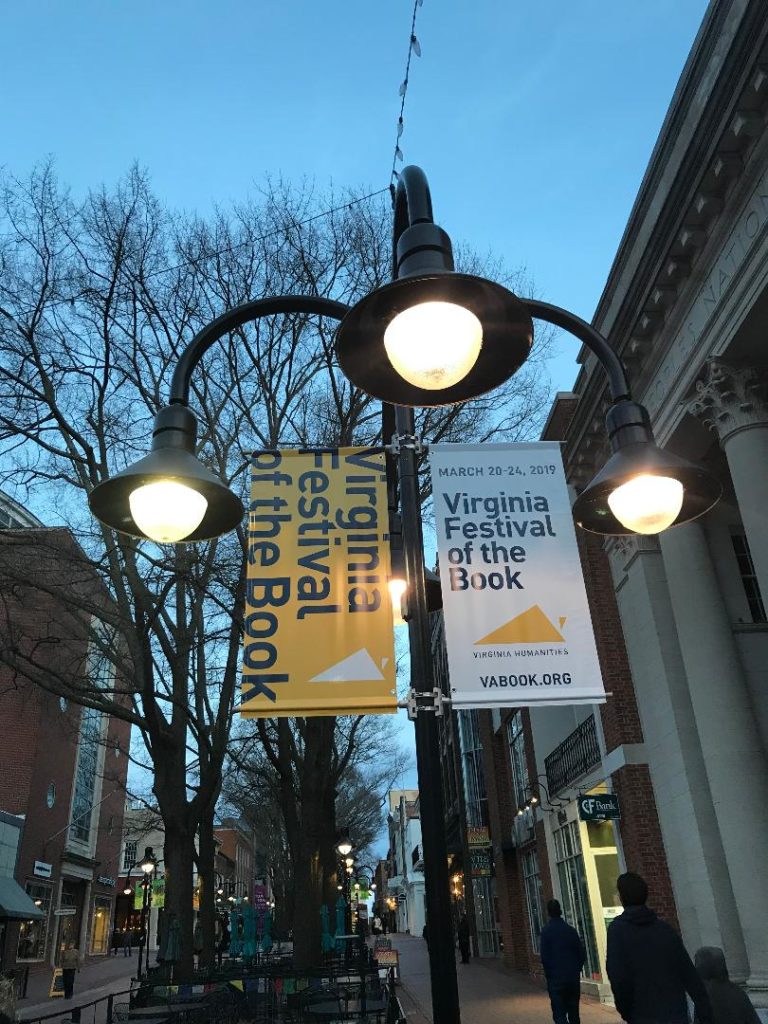 Having spent more than a decade of my professional career attending the annual CES in Las Vegas, I know a thing or two about large conferences (and CES, one of the world’s biggest, definitely includes the good, bad, and especially ugly that come with any big production; couple that with the sensory overload Vegas offers round the clock and the possibilities for hijinks, humor, and exhaustion are all but limitless).

Somewhat ironically, as someone who’s been writing since before I entered the so-called real world, my experience with literary events has been, unfortunately, limited. It was, then, with pleasure that I accepted an offer to visit Charlottesville for this year’s Virginia Festival of the Book and moderate a few panels.

I’ve been fortunate to live close enough that I’ve had occasion to visit C’ville many times during my lifetime. I had a few good friends (a couple of whom are now on VCLA’s Advisory Board) do their graduate studies at UVA, and I felt it was incumbent upon me during those years to make frequent road trips to ensure they were focused on their studies. All of which is to say, Charlottesville is a spectacular place, and in many ways the ideal college town, full of shops, food and drink options, history (speaking of good, bad, and ugly), and culture to burn. I was delighted to be there. 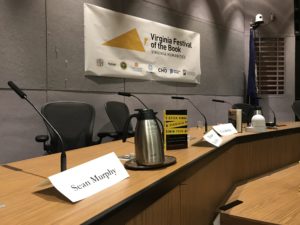 My first panel, wonderfully –and appropriately– entitled Southern Discomfort, featured two excellent writers who have written timely and important books: Pam Kelley, author of Money Rock: A Family’s Story of Cocaine, Race, and Ambition in the New South, and Tom Kapsidelis, author of After Virginia Tech: Guns, Safety, and Healing in the Era of Mass Shootings. Both books deal with acts of tremendous violence (in general) and ways in which the War on Drugs has been an expensive, catastrophic failure, as well as the increasing ease with which Americans can get immediate access to semi-automatic weapons. Lest this sound completely depressing, both books also deal with acts of extraordinary grace, and ways those who survive tragedies can find meaning and purpose.

While Kelley’s book focuses on the stranger-than-fiction trajectory of Belton Lamont Platt (aka Money Rock), Kapsidelis takes a deep (and often disturbing) dive into the events leading up to the April 6, 2007 massacre at Virginia Tech, and the incredible stories of advocacy that arose within that community. By the way, it occurred to me while reading these books that perhaps we need to rethink the narrative about how we tackle gun violence: rather than focusing on 2nd Amendment arguments and implicitly (or explicitly) political talking points, we could turn our attention to something most Americans care about: the staggering costs involved with firearm related hospitalizations. The USA spent $734.6 million dollars annually between 2006-2014. And the kicker? According to a study published by the American Journal of Public Health, “these figures substantially underestimate true health care costs…the numbers don’t take into account, for example, follow-up visits, rehabilitation, and the range of economic, social, and personal deprivations associated with gun injuries and fatalities.” 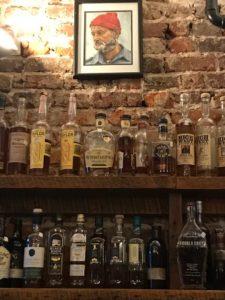 Did I mention that there are many great options for food and drink? A few words about one of my favorites, the aptly-named Whiskey Jar. Any place with this many bottles of bourbon and a portrait of Bill Murray is going to become frontrunner as my preferred local watering hole. 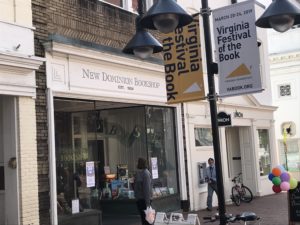 My next panel, entitled Paradoxes & Perceptions: Poetry, featured three excellent writers: Maggie Anderson, Kevin Prufer, and Melissa Stein. Each read from their recent works, and we engaged in some enlightening discourse. Below are my mini-reviews of these gorgeous books:

When I finished Maggie Anderson’s Dear All, I felt like I was leaving a bar after last call, smoke in my jacket, my eyes a little raw, dog hair on my jeans, and –with my head full of memories, desires, and questions– walking into crisp, clear night, enlightened.

Of course in poetry metaphor is the preferred currency, but Kevin Prufer’s repeated invocation of metaphor — the word, the tool– is at once playful, self-deprecating, deeply self-aware, interrogative, and playful. How He Loved Them has poems full of wine bottles, bombs, dreams, war, fathers, death, and especially life.

Perhaps because there are so many insects in Melissa Stein’s Terrible Blooms, and so much of the natural world in these words, I kept thinking of wasps: small but packing a big sting, and one that lingers long after. These poems brim with violence either enacted or implied –silent violences, or violences silenced– and are unafraid of truth, but also make room for (and sense of) the most important thing: beauty.

It was an honor to read this work, hear these poets read from it, and engage them in conversation. 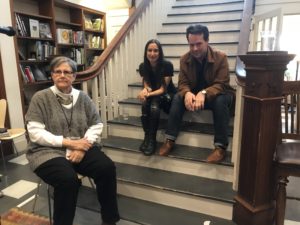 Imagine my surprise, later that evening, when –soaking in the local culture in my hotel bar, along with what I considered a well-deserved nightcap– I heard a familiar voice and looked up at a familiar face. Wow, I thought, that looks like an older version of Brat Pack charter member Emilio Estevez. On a hunch, I googled “Emilio + C’ville” and sure enough, we were partying like it was 1985. As it turns out, our favorite Repo Man was in town to discuss and promote his new film, which he wrote, directed, and stars in, The Public. Fortunately, I was quick enough to capture the moment; unfortunately, no obligatory selfie, and fortunately (for him) he escaped before I was able to pepper him with quotes from Men At Work. 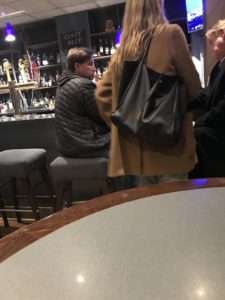 On my last day I moderated a roundtable featuring three literary agents, Erin Hosier, Kristin van Ogtrop, and Wendy Strothman. It was fascinating to hear the different takes on what has –and hasn’t– changed in the literary industry, why the work of agents is so crucial (and, at times, frustrating) and increasingly complicated. I will say, while no footage (that I know of) survived this 90 minute panel, I have a renewed appreciation (and empathy) for what these good people endure at any public event: the very specific and often outrageous questions (“I’m an unpublished writer but I’m curious what kind of advance I should expect when I sign my first contract,” etc.), and the line of hopeful novelists, after the event ends, all with unsolicited manuscripts in hand and many, many more questions. Mission accomplished, I dropped the mic and headed out for my last, and best, meal of the week. 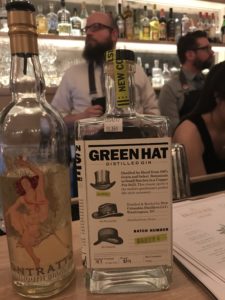 A few words about Brasserie Saison: it is, without question, one of the most impressive restaurants I’ve ever enjoyed. The menu is superb, the drink selection is stellar, and the service is special. I (wisely) sat alone, at the bar, and not only savored a perfectly pan roasted rockfish, but enjoyed a few too many specialty drinks. Their focus is on gin, which I believe is a spirit that doesn’t get nearly enough credit or love. The bartenders (each magnificently bearded and in accordance with some type of state law, colorfully inked) were the real deal: mixologists with deep knowledge (and passion), not hipster poseurs putting a few drops of orange essential oil in a “deconstructed Old Fashioned.” As a dedicated bourbon enthusiast, one thing I’ve learned in the last several years is that both my tequila and gin games were in need of a significant upgrade.

In sum, a well-spent few days that left me exhausted in all the right ways. I look forward to next year! 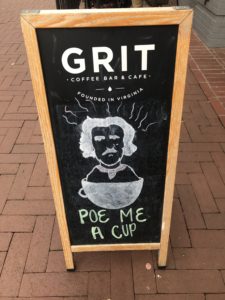 You had me at Hell Poe.